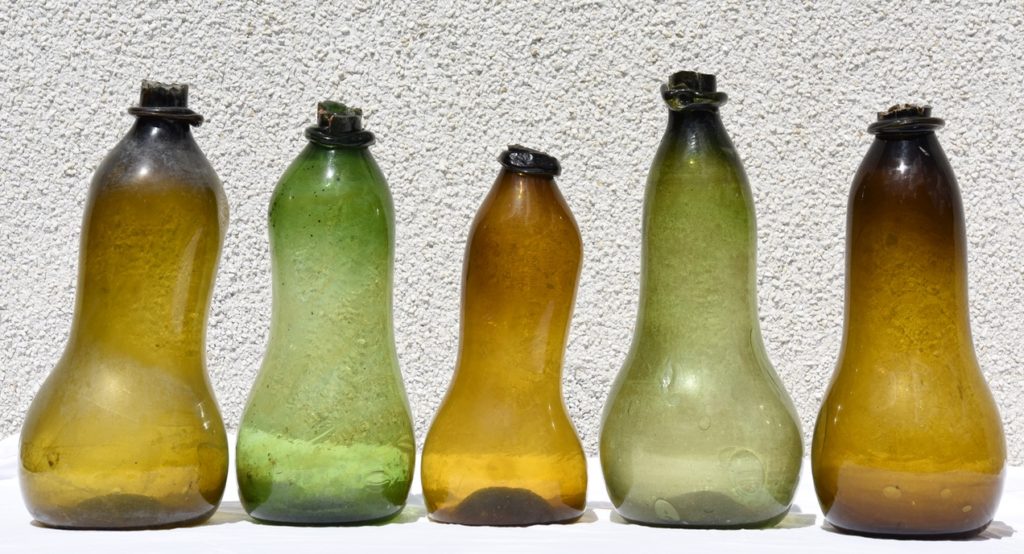 I once wrote in this space: “I wish I owned a stable of them. Maybe someday.” Well, now I own five. So there’s that. And I know of the existence of 16. There’s that. And two of them are sealed – in the lip – which is quite different. And I now know for a fact that there are at least two sizes. In the photo above, the centre bottle is a distinctly smaller size, even though it is not apparent that it is a substantially different item in the photograph. I know of one other in the UK, and three in India that are of the smaller size.

I’m going to suggest that no one knows ANYTHING “for sure” about these double gourd shaped bottles. But I’ve paid a lot of attention and done a lot of research, so I’m willing to make some somewhat-educated guesses based on what I’ve found out thus far.

My current best guess, based on continuing research, is that these bottles were blown in Shiraz, Persia. The quality of the glass is definitely fresh metal – not the crunchy, thin, poor quality metal from Isfahan, but the thicker, soapier glass from Shiraz. Given the lack of potential sources, it’s a simple process of elimination. And yes, I wish they were the same colour as the majority of saddle flasks, and they aren’t, so there’s that.

The largest single population of the double gourds that I know to exist are currently located in a province in northwestern India, so I had to ask – why there? I’m going to postulate, for now at least, that they were blown for the Portuguese merchants of 17th and 18th century Persia who were shipping goods to Portuguese outports in northwest India. It’s tenuous…but it’s a connection, and I haven’t seen anything better.

Now – were these blown for the transport of large quantities of wine (much as the Karabas were produced in Shiraz, Persia, for the export of Shirazi wine)? These bottles mimic the shape of some beautiful “double-gourd” porcelain wine containers, largely made in China and Japan. But they are incredibly thick, heavy glass. So I have to wonder whether they were made to transport a substance that was more precious than wine…and thus I suggest that they may have been used to ship rose water in bulk.

Why rose water? Well, rose water, ounce by ounce, is far more effort to produce than wine, and therefore far more valuable. And alongside these double-gourd transport bottles, what else do we find a lot of in northwest India? You got it – Persian rose water bottles! It also appears that India had little or no native glass industry at this time. In the 19th century, there was no end of bohemian glass rose water bottles shipped to India, but in the 17th and 18th centuries, it appears they used the products of Persian glassworks.

Christie’s auction house sold two of these about a decade ago, and called them “Gujarati Transport Bottles,” again, pointing to northwest India. They very well may have been found in Gujarat, and they were most likely transport bottles…but I do not believe they were the product of India. I’ve seen very few images of glass blown in the Gujarat region of northwestern India (the sole glassworks I know of was in the city of Kapadwanj), but I see no comparison between that thin, fine glass and these behemoths. Perhaps the lads and ladies at Christies have access to more resource material than I do, but I find no reason to agree with them, based on my research.

These bottles come in amber, green and blue aqua, and the blue aqua bottle seems to have a more finished lip – to go along with that colour generally being associated with newer glass than the two other colours. This fact leads me to believe that these bottles were produced for a lengthy period of time.

Bottles 1-2 sold at auction in the UK (2005). Current whereabouts unknown.

Bottle 7, pictured with its owner to give a sense of scale, in a private collection in India (2013).

Bottle 15 in a private collection in London, UK (2016). It was purchased in an antique shop in London. **Note that Bottle 15 is the smaller size variant.

Bottle 16 (PC-205) is in my collection (2016). It came to me from a German collector who bought it from a French antiques dealer. **Note that Bottle 16 is the small size variant.

Another puzzle piece is provided by this bevy of bottles, which look like the next step forward for Bottles 10 and 7, above. These very crude bottles are currently used by a lemon juice dealer living in Isfahan, Iran. They have the coloured lip of Bottle 7, as well as the height, although they have clearly lost the “double-gourd” effect, as in Bottle 10.