History – 16th Century and before

Persian, or Islamic, glass went through early, middle and late phases. In its time, it was some of the most spectacular glass on the planet. The Persians learned their early techniques from the Romans. Middle-Period Persian glass was especially wonderful to look at. Some of the techniques we see in late Persians, particularly the string wrap that went multiple times around the neck, were transferred through the ages.

There is much that has been published about both early and middle period Persian glass (much, much more than about Late Persians!). I will extend this introduction as time allows, but it’s all been written, many times, before. For now, I will let Robert Charleston set the scene:

“Little is known about the glass-making centres of medieval Persia, and less about those of the 15th and 16th centuries. The disruptions of the Mongol period, and the disorders and Turkish invasions of the early Safavid period, under Shah Ismail (ruled 1499-1524) and Shah Tahmasp (ruled 1538-1576), were hardly conducive to the re-establishment of an industry like glass-making, which required considerable fixed capital assets in the way of buildings, and assured access to fuel and certain raw materials. The first shafts of light begin to fall almost simultaneously with the accession to the throne of the great Shah Abbas I in 1587.” 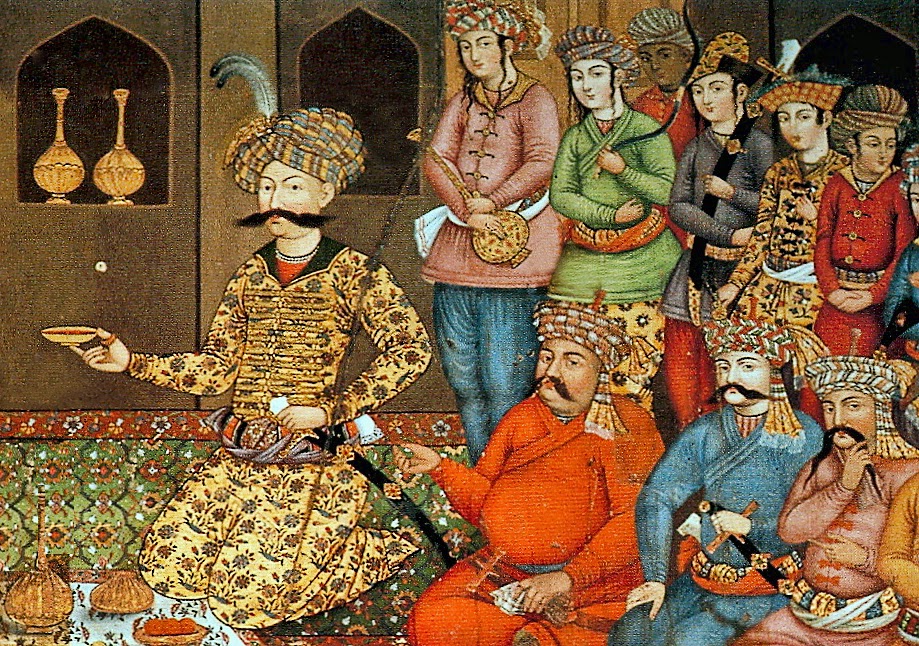 Above is an image of Shah Abbas, at left. Note the four bottles in the image, all very similarly shaped to the early Rosewater Sprinklers.

Reverse-engineering Jean Chardin’s 1670 claim that “the Art of Glass-making was brought to [Persia] from Venice, within these four score Years [by a] Beggarly and Covetous Italian [who] taught it at Chiras, for the Sum of fifty Crowns,” one might suggest that glass-making began in Shiraz near the end of the 16th century, or at the beginning of the 17th. Additionally, Shah Abbas (see paragraph above) seems to have invested in art, architecture, and to have enjoyed many of Persia’s locally-produced goods, including Shirazi wine. Therefore, one might wish to interpret that Chardin’s point about the rise of glass-making at Shiraz happened about the time of the rise of Shah Abbas to the throne.